Why is the idea of Land Grant important to President Henry and the comments he
makes in his 1968 speech? What was innovative about Land Grant – what did it change?

The idea of the Morrill Land Grant of 1862 is fundamentally necessary to understand the monumental history of the University of Illinois and to see where it may grow from there. During the centennial anniversary of the Land Grant, the University of Illinois President Henry clearly illustrates how far the University has gone in increasing access and admission to higher education, contributing to academic research across a variety of disciplines, and preparing thousands of students for careers. However, he does not stop there and is quick to point out the areas and fields that the University needs work on. While the initial vision of the Land Grant was static in its emphasis on education for the agricultural laborer, its interpretation and propagation in society remains dynamic and ever-changing to the needs of the institution and its people.

Innately, the Morrill Land Grant set aside the means for the University of Illinois—Illinois Industrial University originally—to grow and to educate Illinoisans on agriculture and best labor practices. Outside of Davenport Hall even, we can read: “Industrial education prepares the way for a millennium of labor.” The ever reaches of such an act sought out to “institutionalize  practical  fields  of study, meld them with liberal education, open them to a new class of students, and charge the states with finding the means to accomplish it all” (Geiger 281). The Land Grant opened up publicly-funded institutions of higher education in a plethora of states and transformed the access to education and innovation from then on. From there, we can see how each state and people had their own autonomy to determine what this meant, but for many land-grant universities such as the University of Illinois, this meant hopefully lowering the socioeconomic barrier to access of universities and increasing its growth in order to meet demand—although there was still a long way to go (Henry 2). In this, we can see that President Henry outlines Illinois as the next beacon into the future, but in order to be that, the University necessitates growth and visionaries such as him to guide the University into the next century. Regardless, the principle remains that the Morrill Land Grant’s rationale of preparation for the common man remains but has grown to be far more than that.

By extrapolating the Land Grant’s original idea of education for the masses as a means to better equip citizens to participate in society, we can then understand its criticisms. At the same time of President Henry’s speech, there was backlash by students against the university for failing to push forth critical thought and listen to the qualms of the next generation of change-makers. Students felt simply unprepared, and as though a university education no longer had merit—it was no longer enough to simply educate students on agriculture and industry as originally poised but to equip them with the intellectual and critical thinking to solve whatever problems came toward them.  Thus, the Morrill Land Grant and its effects prove dynamic and open to interpretation. As the student Centennial Convocation speaker Paul Schroeder said, “Let us all work together not so much to liberalize the present order, as to gain our liberation from it” (1968). It is not enough for the students to be educated but for faculty and students alike to pioneer the vision of the future, be it through industry or academia.

During quarantine, I have designated this space as a location to separate myself from my home life and enter my academic and professional life. In order to fully put myself in my working mindset, there are several key elements that make up this space. First and foremost, the object that I believe best represents this space is the post-it on the entryway. I prefer to work in this space because it is relatively secluded from the rest of the house which puts a buffer between me and my family, who will often talk to me or ask favors of me, in order to make sure I can attend meetings and online classes without interruptions. I have taken to placing a post-it note on the wall to indicate to others who are sharing space with me that I cannot be interrupted at the moment. Instead of a door, this room is connected to the rest of my house via an open archway, which I did not initially register as an innovation, but it has proven to be the perfect boundary to mediate between myself and the rest of my household when I am working at home. Unlike a closed door, my family members feel like they are able to enter the space and talk to me, however in combination with the post-it note, they are able to tell when I am working on something that cannot be interrupted.

One of the key issues during quarantine has been establishing boundaries. This includes boundaries between myself and my family and also boundaries between my workday and my downtime. This area is not particularly well lit during the evening and night time which at first I found an inconvenience, because it made it more frustrating to work late into the night. But over time I’ve started to register the change in daylight as an indication of the end of my workday and been more mindful of setting a clear end time to my workday.  The change in daylight in a way also represents a change in ownership of this space. During the day I use this space, specifically the desktop computer, to attend virtual meetings and do schoolwork, however later at night, my brother uses the desktop computer to play video games and video call with his friends.

Simply speaking, the innovations in the space are uncountable. We could simply be talking about the double-walled glass acting as insulator to the cold outdoors to the Mac desktop computer that communicates to anywhere in the world to the fluorescent lightbulb that brighten the room with a flick of a switch. While the room may seem cluttered and not specifically “modern,” the innovations it relies on are definitely modern. Even looking at something so simple as the curtains that block out light, each function and item of the room could be dissected as having had hundreds to thousands of years of science and thought put into it. 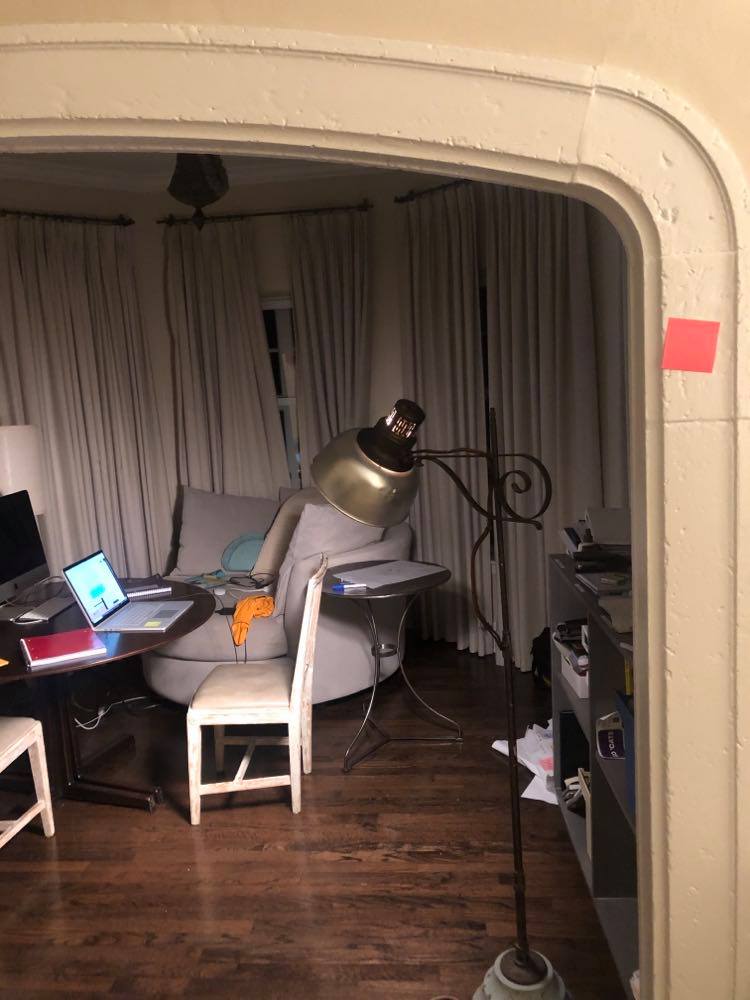 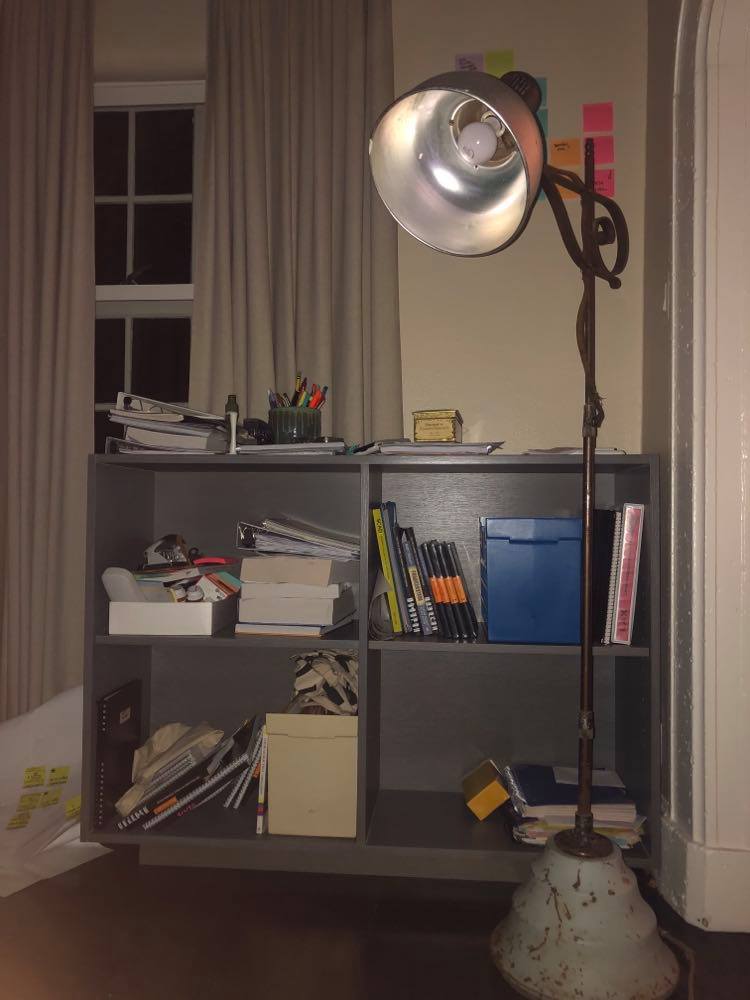 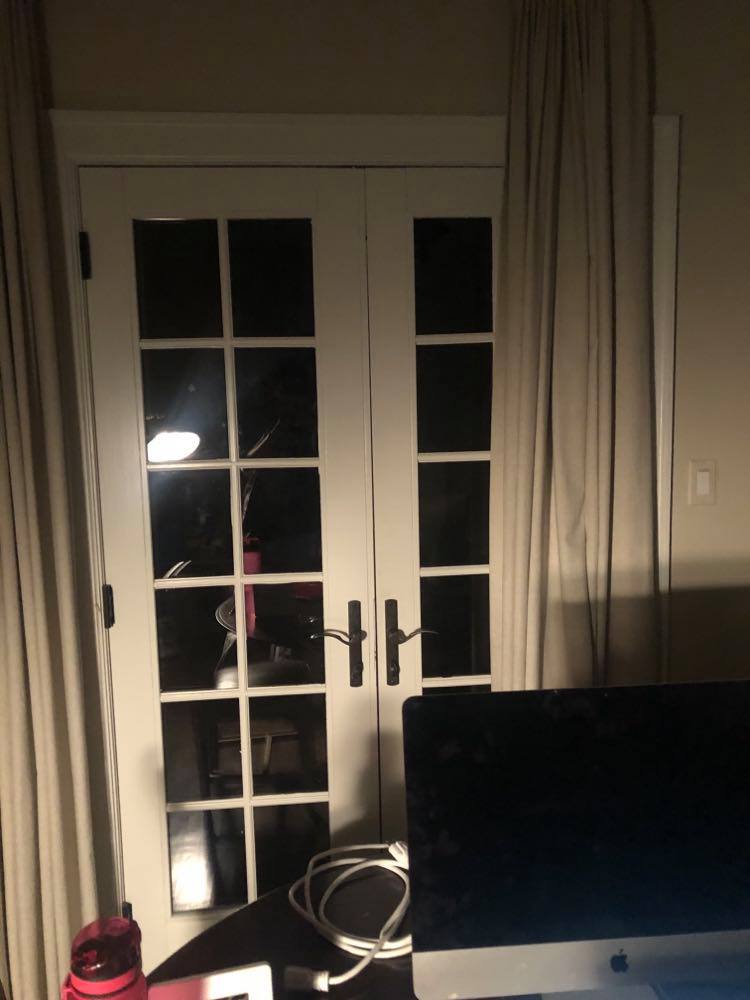 The latter post covered my home-life due to a quick visit back home, but this post will cover my new bedroom/apartment in Champaign. I have since settled in somewhat to Champaign, but the boxes and open luggage on the ground do not clearly illustrate that fact. I have had all the time in the world, and even as I spend the vast majority of the day in my room, I somehow find myself content with its clutter. The fact being that no one ever has to interface with my room except for myself, so I do not feel specifically inclined to make it presentable. Hey, if it works for me, it works, right? I sleep, work, shower, eat, etc. here.

What most annoys me though and why this space is noted alongside my quarantine home is this hole in the wall I have above my toilet. It was here when I moved in, and due to my room still remaining a mess, I have yet to call up maintenance to address it, even though the fact it exists rather bothers me. To be fair, a “hole” is not an object in a traditional sense, but its existence best represents my outlook in life, depending on how you frame it. It could be said that I am immensely lazy for allowing it to continue bother me and haunt my mind (e.g. what if the pipes burst? What if I’m breathing in asbestos? What if a spider comes out?), or it could be said that I do not shy away from adversity and am unhindered by first-world expectations. This is still a world away from the home-life and cleanliness that I observe when I visit my family in Vietnam.

What’s clear in my photos is that I let boxes and luggage pile up in my room. To be fair, I was trying to fold up those boxes, but I could find no adequate space for them. Either way, we can remark on the innovation of the modern microwave and instant pot. The microwave likely came through from research in academia on the effects of different wavelengths of electromagnetic radiation–luckily, do to the Faraday cage of microwaves, we are largely unhindered by the exposure to radiation to cook our food. Likewise, the innovation and popularity of the Instant Pot pressurized cooker is quite recent, and I can recall that it was started by an engineer who invested his life’s savings into its creation. Since then, it has been the beloved household cooker of many meals. Each of these innovations ultimately save time in the kitchen. No longer does one have to wait for dozens of minutes to reheat a frozen meal or for hours to create delicious bone broth. As well, they save space and are efficient somewhat as they can be reused thousands of times.